In this hands-on lab, you will use Message Passing Interface (MPI) point-to-point operations to implement the two broadcast algorithms we discussed in the previous class. The first of these uses a tree-based approach, which is latency-optimal; the second uses a scatter + all-gather approach, which is bandwidth-optimal (to within a constant factor).

Recall that MPI provides a portable interface for parallel tasks running on different nodes of a cluster or supercomputer to send messages to each other.

As usual, you may work in teams of up to two people per team. In addition to committing your code changes and data files, please also create a PDF file called README.pdf, which should contain:

Part 0a: Setting up MPI for your environment

Start by logging into Jinx and setting up your environment so that the code we are providing will compile and run. In particular, this lab's experiments rely on a particular version of the GCC compiler as well as the MPI communication library discussed in the previous class.

Set up your shell environment for compiling and running MPI programs. Add the following lines to your .bashrc file in your home directory. (Go ahead and create this file if it does not already exist.)

You may also need to add the following line to .bash_profile, also in your home directory. (Again, create this file if it does not already exist.)

Once you've made these changes, log out and log back in for this setup to take effect. If it worked, then the command

For future reference, the above sets up a version of OpenMPI, not to be confused with OpenMP. The other major open-source MPI implementation is MPICH. Many of the major cluster, supercomputer, and networking vendors [1] provide their own implementations of MPI as well.

Part 0b: Obtaining this week's code

Use the same fork-checkout procedure from Lab 1. [2] The repo you want is gtcse6230fa14/lab4. As a reminder, the basic steps to get started are:

(Alternatively, if you figured out how to do password-less checkouts using ssh keys, you might use the alternative checkout style, git clone git@bitbucket.org:MyBbLogin/lab4--MyBbLogin.git.)

If it worked, you'll have a lab4-MyBbLogin subdirectory that you can start editing.

The code we have provided includes these files:

Your goal is to devise, model, and implement algorithms for broadcasting the data from one MPI process to all others, using _only_ the MPI point-to-point communication operations, such as MPI_Send, MPI_Recv, or their non-blocking counterparts, MPI_Isend, MPI_Irecv, and MPI_Wait.

The file serial.c implements a "naive" broadcast algorithm. The data resides initially on MPI rank 0. This rank sends its data to each of the other processes, one by one. Inspect serial.c and verify that the bcast() routine implemented therein implements such a scheme.

We ran this benchmark on the Jinx cluster. The results appear in the graph below. More specifically, we show the average time per broadcast (y-axis) as a function of the size of the data size (x-axis). 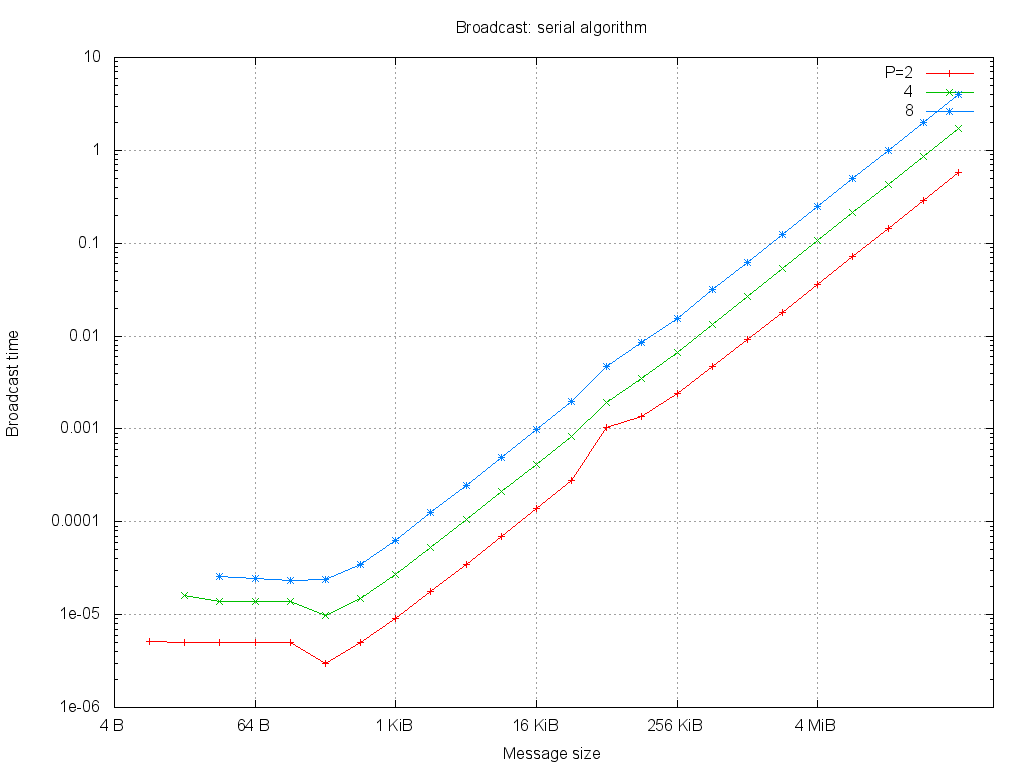 Question 1: Assume that the time \(T(n)\) to send a message of size \(n\) words is \(T_{\mbox{msg}}(n) = \alpha + \beta n\), where \(\alpha\) is the message latency, in units of time, and \(\beta\) is the inverse bandwidth, in units of time per word. Then, use the data of Figure 1 to estimate the values of \(\alpha\) and \(\beta\). You may either eyeball the plot or use the raw data used to generate these plots, which appear at the following links for two processors (serial-2.dat), four processors (serial-4.dat), and eight processors (serial-8.dat). Explain how you derived your estimate and report \(\alpha\) in microseconds and \(\beta\) in microseconds per byte. (Note that the plot shows message sizes along the x-axis in bytes, kibibytes, and mebibytes.)

In class, we described two algorithms for broadcast. The first algorithm is a minimum spanning tree approach. We argued this method is good for small messages because it is optimal with respect to latency (number of messages). The other uses a two-stage "scatter" plus "all-gather" technique, which we argued was good for large messages ("big vectors") because it trades a higher latency component for an asymptotically-optimal bandwidth component.

Question 2: Using your model of message time from Question 1, write down an analytical model of the time to execute the tree-based algorithm.

Let's see how accurately the model from Question 2 predicts actual execution time by running the tree-based algorithm. We have provided a Makefile to simplify compiling and running this code (and the others we will use in this lab).

If it succeeds, it will produce the binary program named tree.

We have provided Makefile rules that make it easy to run this code and generate a performance plot like that shown in Figure 1 (above). The command,

will submit a batch job that runs the tree program with two nodes (P=2) and various message sizes. Go ahead and run this command now; the qstat -a part peeks at the job queue to verify the job is in the queue. (Repeat qstat -a to monitor the progress of this job.) Once it begins running, it should complete in about a minute and generate a file called, tree-2.dat, which will have the same format as the serial-?.dat files above. Repeat this command with P=4 and P=8 to collect data for the tree-based algorithm running with four and eight nodes, respectively.

Once you've collected this data, you can generate a plot by executing the command,

This will run a gnuplot script to plot the tree-2.dat, tree-4.dat, and tree-8.dat data. If successful, it will create a file called tree.png. You can download or use display to see it. [3]

Question 3: Compare these data to your model from Question 2. How well do they agree?

Take a look at bigvec.c, which is a partial implementation of the algorithm designed for large vectors. In particular, we've provided the "scatter" step; you will need to complete the "all-gather" step.

Question 4: Complete the "all-gather" code, using only point-to-point MPI operations (either blocking or non-blocking, as you wish). See the notes below on compiling and testing your code. You may make the same assumptions as we do in the tree-based algorithm: power-of-two number of processes and the number of processes evenly dividing the message length.

To compile your implementation, you can use the command,

This will generate the executable, bigvec. You may choose to test it interactively on a single node; once you've gotten it debugged, perform a timing run on eight nodes using the command,

When this run succeeds, it will create a data file called, bigvec-8.dat.

Question 5: Plot the serial-8.dat, tree-8.dat, and bigvec-8.dat together. (See below for a make rule we have provided that uses gnuplot script to do it; alternatively, use any plotting software you wish.) You should see that the tree-based method is faster for "small" messages, whereas the scatter+allgather method if faster for "large" messages. What is the cross-over point (message size) between the tree and scatter+allgather methods?

To use the gnuplot script we have provided to generate this plot, use make to run it as follows:

Turning in your solution

Once you are satisfied, be sure you add and commit your code and all of the *.dat files, as well as any images you produced. Document your work, including the answers to the questions above, in a README.pdf file as directed at the top of this page. Finally, transfer these to the gtcse6230fa14 account by the deadline.