This is the result of the survey taken 22/7/2012 to more than 3000 software developers. The objective was to learn habits of programmers and make an infography of this profession.

Because hours and times had to be parsed, some code was written to parse data. The code to extract this data was written in Scala. In this project you will find everything you need to run and extract the values yourself. This is a work in progress. Please feel free to suggest information we can entail from this set of data.

97.6% of the dates were correctly parsed for this average.

96.98% of the dates were correctly parsed for this average. 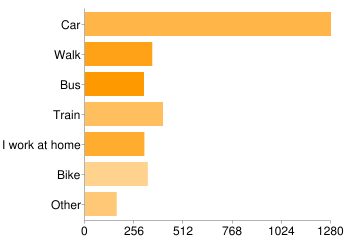 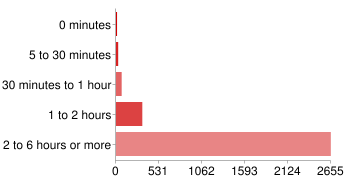 Developers spend more than 2 hours per day developing code. Less than 13% spend less than 2 hours coding. Coding is also a disperse activity throughout the day (73%). Although the data was badly collected (due to 'catch all' field of '2 to 6 or more'), this should be the most pervasive activity during the day. 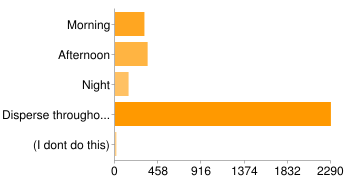 47% of programmers don't talk to clients. 39% spend less than 1 hour a day doing it. Talking to clients is also a disperse activity throughout the day 69% of programmers spend less than 1 hour on daily meetings Programmers also tend to have their meeting either on the morning or on the afternoon (having 27% and 23% respectively which totals 50%) A large majority also has meetings dispersed throughout the day. 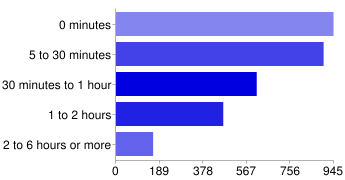 99% of the data was correctly parsed.

Developers spend on a daily average 56.4 minutes sending, receiving or viewing emails. 94.75% of the values were correctly parsed for this average.

Programmers get on average 4.5 hours to themselves.

94.05% of the values were correctly parsed for this average.

Programmers go to bed on average at 22:54:29. Assuming they do not fall asleep right away, they get close to 9 hours of sleep everyday.

32% confessed to have some sort of difficult sleep (mild or severe insomnia).