A good user interface gets out of the way and makes it easy for teams to understand, focus on, and complete their work. We’ve been listening to our users on how to improve the navigation of Bitbucket Cloud’s UI and have been hard at work for over a year to address the feedback. Today we’re taking the first step in improving Bitbucket Cloud’s UI and launching a new navigation experience.

As part of this new UI, we’ve streamlined navigation to create a more intuitive, warm, and inviting interface. Let’s take a deeper look at how we arrived at this new design, what it looks like and how you can enable it.

How did we land on this new design?

One of the best signals we have to understand our customers is NPS (Net Promoter Score) feedback. We pulled a research team together to sift through thousands of NPS responses to find common pain points and opportunities for improvement. One recurring theme we found was “complexity” – clearly a problem, but tough to address without breaking it down further. So, we conducted qualitative interviews and narrowed down areas of improvement to address perceived complexity:

How did we test the new UI?

We’ve been testing our design direction from the beginning with actual users to validate and stay on track. Usertesting.com was hugely helpful for early signal testing and getting quick qualitative feedback from real users. Building on those positive results, we shipped an initial implementation in Bitbucket in October 2016 to our internal Bitbucket dev team.

Since then, we’ve expanded from just the Bitbucket dev team to hundreds of users, integration partners, and Atlassians and have received overwhelmingly positive feedback. Any UI change, especially one as large as adopting a new navigation paradigm, involves tough calls and tradeoffs. Based on our research and testing, we’re optimistic that people will intuitively understand the new layout and be even more productive with Bitbucket.

Since we launched the new navigation experience back in April, we’ve been gathering a ton of feedback from our users?the good, the bad and ugly?and we’ve made some updates. So what did we change? 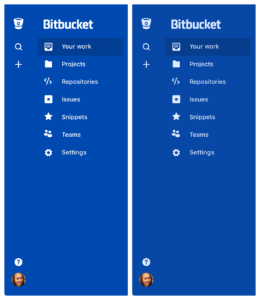 I have feedback on the new Bitbucket experience! How do I give it?

This initial roll out is just the beginning. We’ve started with navigation, updated bitbucket.org, and changes are now starting to flow in to product.

Now after all this testing, it is time to get feedback on a larger scale. We’re going to be continuing to improve the UI, the navigation, and all the things. While we do that, we’d love to continue getting feedback. To give us feedback, click on your profile picture and navigate to the “Give feedback” link to give us your thoughts. We’re listening! If you’re not already a Bitbucket user, sign up for Bitbucket to give it a try. Give us feedback and we hope you love the new UI as much as we do.

Today Bitbucket Cloud is proud to announce an update to its V2 API, designed to offer developers a more robust and consistent…
April 11, 2017 5 min read

Bitbucket Cloud gears up for an amazing 2018

We launched Bitbucket Pipelines less than a year ago as a fully hosted CI/CD service that lives next to your code. By having…
April 11, 2017 5 min read