With more teams adopting CI/CD and deploying code on a regular basis, keeping up-to-date with what has been deployed has become more difficult. Teams need a single place to track their deployments so they can build and release their software quickly with confidence. 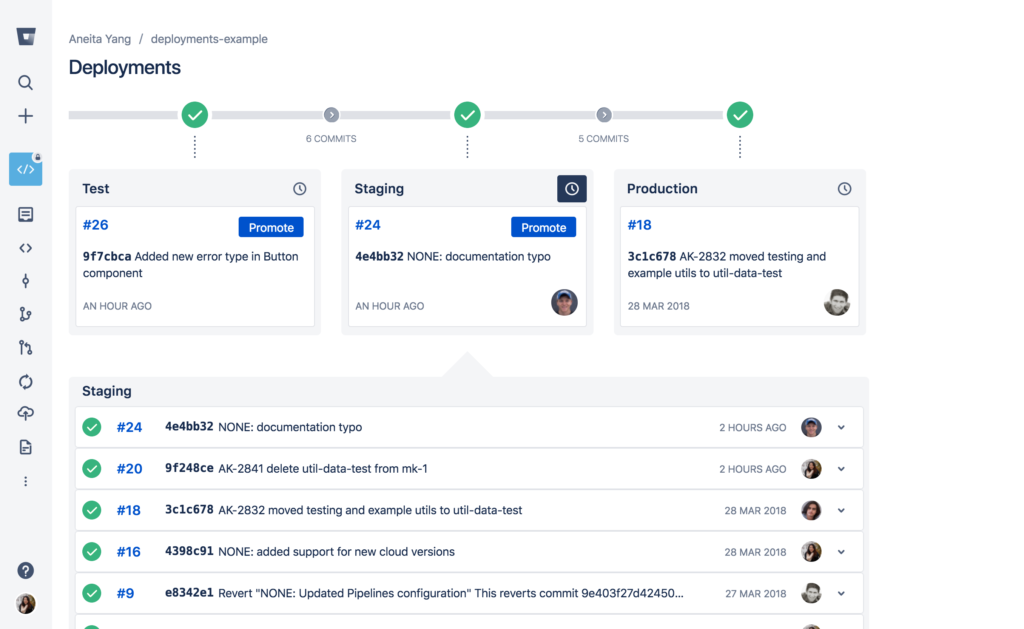 The Bitbucket Deployments dashboard automatically tracks all the deployments you run through Pipelines, giving your team visibility over what’s running in each environment and the status of each deployment. There’s also a complete history of all deployments to each environment, shown by clicking on the history icon on each.

Environments in Bitbucket Deployments are configured out of the box as test, staging, and production, and your team can choose to use one or more of these environments as required by your workflow.

This improved visibility is already helping teams dramatically improve their CD workflows, like the team at Fran’s Chocolates in Seattle, WA:

“Before adopting Bitbucket Pipelines, our delivery process was like the wild west. There was nothing to stop broken code from being deployed or see what had been deployed where. Bitbucket Deployments was the final step in getting transparency and control over our deployments.” – James Sweeney, CTO at Fran's Chocolates

Where a manual deployment is available, Bitbucket Deployments shows a Promote button on the dashboard. This gives your team control over when to promote a build to a new environment, and lets you preview the specific commits and code changes before hitting Deploy.

A complete record of what code was deployed when

By clicking on the history icon, you can see a history of all earlier deployments to an environment. Clicking on any deployment on the dashboard will load a summary showing the changes that were deployed, along with information about when it was deployed and by whom.

With a detailed history of past deployments, investigating problems becomes much faster and simpler. Your team can confirm the cause of an issue by inspecting the code and commits that were deployed, all without leaving the deployment dashboard.

A new design to better support your workflow

Along with many functional improvements, we’ve done a complete visual redesign of the deployment dashboard for this release. The initial state is clean and shows the most relevant status information. A deployment workflow bar across the top clearly communicates the flow of builds through your deployment environments.

For teams with a manual promotion workflow, we’ve highlighted and expanded the promotion buttons to make it easier to perform this common action. 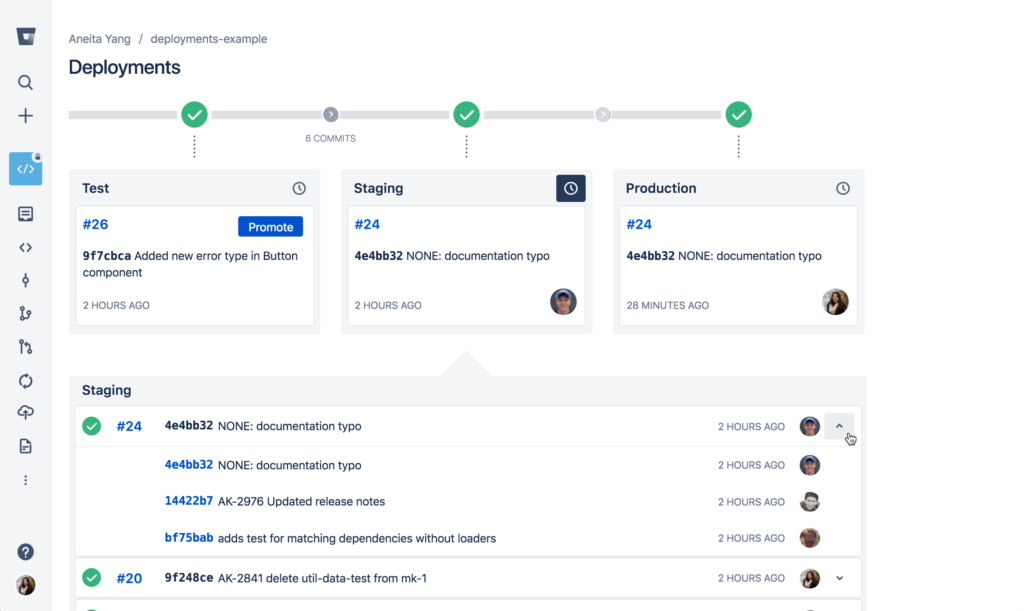 This is just the beginning?

We have a ton more exciting things in the pipeline for Bitbucket Deployments, including deployment concurrency control, rerunning failed deployments and Jira Software integration. We’d also love to hear your feedback about how you’re using Bitbucket and how we could make Deployments better.

Teams practicing Continuous Delivery ensure that every change pushed to the main repo is ready to be shipped. They have the…

Teams are deploying code faster than ever, thanks to continuous delivery practices and tools like Bitbucket Pipelines. But this has caused a…