On the internet, everyone has an embarrassing past.

Maybe it was a string of posts in alt.wesley.crusher.die.die.die. Maybe it’s that first username you chose on AOL when you were eleven that somehow managed to stick with you. Maybe you were on LiveJournal. Or maybe you signed up to Bitbucket with your awesome username ‘teddybearluv69’. Sure, it seemed really funny at the time, and all of your friends totally cracked up when you sent them the URL.

At first you only had couple of repositories, like your Monty Python-themed IRC-bot and your script to auto-troll 4chan. But then you accidentally put some real code there and pretty soon you needed someone from work to look at it. Suddenly you realized, “Hey, maybe this teddybearluv69 idea, while still clearly funny, might be a career limiting move.”

You don’t want to be laughed at every time a new developer needs access to your code. So you started looking around for a way to change your username, but there was no way to do that in Bitbucket. Until now you had email our support team. Of course we’d make the change for you, but only after calling everyone else in the office over to the computer to laugh at you.

Today we’re happy to announce that you can now save yourself future embarrassment and rename your account on your own. From the account management page, simply select the ‘rename my account’ link and you’ll be on your way. 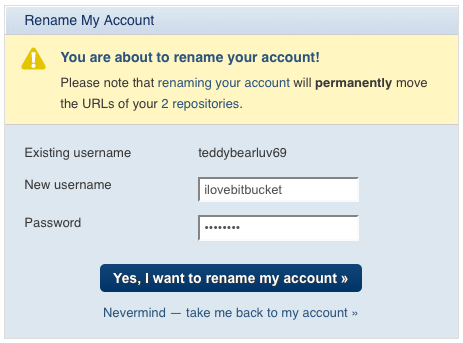 When an account is renamed, be aware that all repository URLs will be changed. Any users who want to push any updates that are not already committed, will need to change their Mercurial repository endpoint. It’s a pretty simple change. You’ll need to edit your project/.hg/hgrc configuration file.

with Mercurial’s easy merging, you could also run the command:

which will push the changes from your current clone to the new repository URL.

In addition to that, we also added the ability to remove your account without contacting support. Clearly, no one will actually ever click that button, but we thought it was important to have, just for completeness.

This week's key changes are:

Visualize the changes between forked repositories One of the reasons DVCS is awesome is because it makes forking cheap and easy.…
November 09, 2010 2 min read

With Mercurial and other DVCSes, commits are performed locally before sharing with other developers. When making a local commit, you’re telling…
November 09, 2010 2 min read