In the Bitbucket team, we believe containerization is the future of continuous integration and deployment. Running your software in containers brings consistency and predictability all the way from your development environment, through your CI/CD pipeline out to production.

To help smooth the path for container-based development, I wanted to reflect back on a set of improvements we’ve made to Docker support in Pipelines over the past few months, which bring speed and new capabilities to your build process. With these improvements, Bitbucket Pipelines is now the leading choice for building and shipping Docker-enabled applications in the cloud.

Pipelines is Docker all the way down

Docker applications will feel at home on Bitbucket Pipelines because everything in Pipelines is built on Docker:

Here’s a diagram showing how this all fits together: 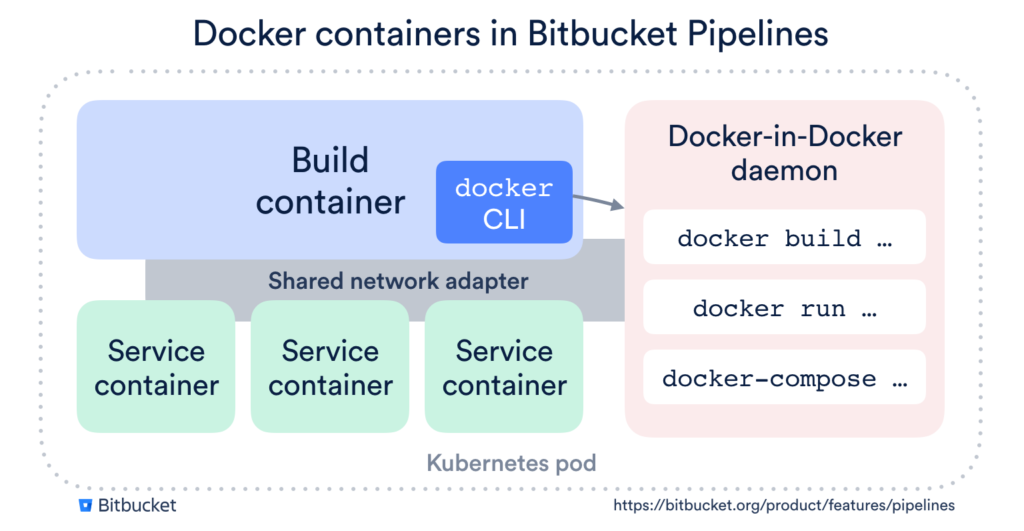 But this is just the beginning with Pipelines. From this solid foundation, we’ve been able to layer on some great features that will make your Docker builds even faster and more powerful.

"My build is too fast", said no developer, ever. We've built several levels of caching into Pipelines for Docker users, so your Docker builds can run as fast in the cloud as they do locally:

Docker builds up to 7GB with configurable memory limits

With two improvements that enable bigger and more complex builds, you can now use up to 7GB for building and running Docker containers in Pipelines:

Here’s an example of configuring 7GB for Docker operations in bitbucket-pipelines.yml:

This additional memory might make you wonder why you wouldn’t just spin up your entire application in Pipelines for some delicious integration testing. Which leads us on to?

Spin up your entire application with docker-compose

If you’re using Docker heavily, you probably have a bunch of docker-compose YAML files to kick off your application in a variety of configurations. With the Docker-in-Docker daemon in Pipelines, you can now use docker-compose to spin up your entire application for testing.

Below is an example of using docker-compose with a 7GB memory allocation to spin up a set of services and test them out.

Note that this example has a few extra commands to install the mysql client and docker-compose binaries that aren’t necessary in a real build scenario, where you would bake your dependencies into a custom Docker image for your build environment.

This example uses this docker-compose.yml, and wait-for-container.sh ? a small shell script to poll the Docker health check and wait for a container to start.

If you want a better look at how this docker-compose example fits together, check out the docker branch in my demo repository.

Try Bitbucket for your next Docker-powered project

If your team is big into Docker, you now have a list of great reasons to try out Bitbucket for your next project.

Try Bitbucket today, and enjoy the benefits of a CI/CD solution purpose-built for Docker.

We launched Bitbucket Pipelines less than a year ago as a fully hosted CI/CD service that lives next to your code. By having…
May 29, 2018 4 min read

We are rolling out Docker v20 to Pipelines in June 2021

Docker v20 was officially released a few months ago, bringing new features that will make your builds faster and more secure.…
May 29, 2018 4 min read