Companies love delivering their applications using Docker. According to Forrester, 30% of enterprise developers are actively exploring containers, and Docker is the dominant DevOps tool, with 35% of organizations adopting it, according to a recent RightScale survey. Docker provides a painless method of building and deploying applications as a set of independent microservices, which are scalable and resilient.

We developed Pipelines to allow all teams to test and deploy their software faster, using Docker containers to manage their build environment. Teams save countless hours and headaches by avoiding manual build server configuration, choosing instead from the enormous range of publicly available containers on Docker Hub, or bringing your own Docker image for a custom build environment.

“Software development teams need to move fast, which is why so many are turning to Docker. As companies embrace continuous delivery, testing becomes a crucial part of the development process, not an afterthought. By adding support for Docker in Bitbucket Pipelines, Atlassian is delivering modern software development tools and processes for continuous delivery. With Bitbucket Pipelines, there's no need to switch to another application to use Docker containers for testing software, and no need to juggle permissions and access, or set up build servers.”
? Nick Stinemates, VP of business development and technical alliances, Docker

Use Bitbucket Pipelines to build, tag and push Docker images

Starting today, you can build your application as Docker containers, benefiting from the portability and minimal overhead of containerization. No need to install an additional plugin or run your own Docker service like in Jenkins or other legacy CI systems ? just enable with 2-lines in your bitbucket-pipelines.yml and it just works.

This seamless Docker integration facilitates a whole new set of workflows for Bitbucket teams, including:

Bitbucket is now the only tool your team needs to code, build, test and deploy your applications in the cloud, covering the full lifecycle for teams building with microservices.

Setting up integration testing with a database or other dependency on your build server is usually a mess of configuration files. You might even need to configure additional agents or build Amazon AMI images to get the dependencies up and running for your build. Docker has the potential to make that so much easier, with thousands of pre-built images for commonly used software like MySQL and Redis, and standardized configuration through environment variables.

Today we’re excited to announce service containers for Bitbucket Pipelines, bringing the power of Docker to your test environment configuration. You can now run up to three background services in your pipeline, in addition to your build container, using your own Docker images or any of those available on Docker Hub. This makes it a breeze to set up integration testing with databases like MySQL or PostgreSQL or run other common services like ElasticSearch or memcached.

There are several benefits to how service containers work in Pipelines:

“With Docker and service containers, we now rely on Bitbucket Pipelines for our entire continuous deployment strategy. We can go from a developer pushing to Bitbucket, code tested in Pipelines, deployed to AWS, and live on staging within 5 minutes for the API and less than a minute for web apps and support systems.” 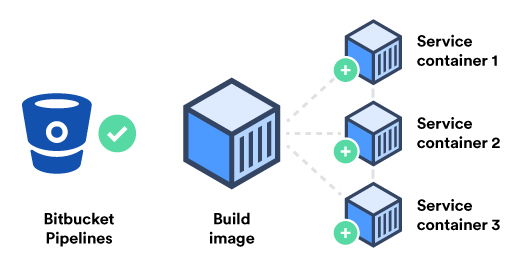 Why switch to Bitbucket Pipelines from your legacy build server?

We talk with many companies who are still using legacy build servers like Jenkins and struggling with three big challenges:

With integrated Pipelines for continuous integration and delivery (CI/CD), Bitbucket solves these problems and helps your team move faster. Pipelines sits within your codebase and removes the barrier between the team, the code, and the configuration. The configuration is simple and lives in your code, versioned and managed alongside your application. 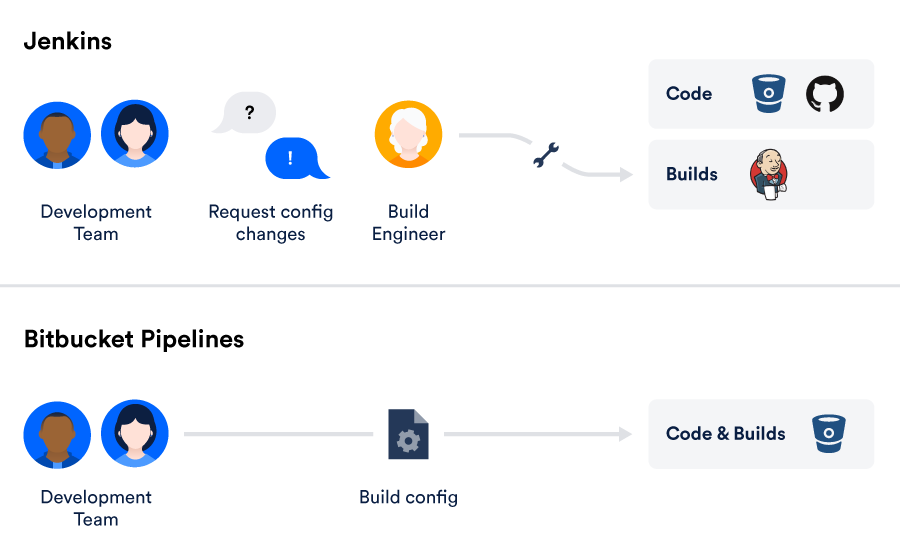 With Bitbucket Pipelines, there's no need to switch to another application, no need to juggle permissions and access, or set up build servers ? and thanks to our cloud infrastructure you get unlimited concurrent builds.

We are happy to announce that one of the top voted features for Bitbucket Pipelines, Docker BuildKit is now available. You…
April 18, 2017 5 min read

We launched Bitbucket Pipelines less than a year ago as a fully hosted CI/CD service that lives next to your code. By having…
April 18, 2017 5 min read

In the Bitbucket team, we believe containerization is the future of continuous integration and deployment. Running your software in containers brings…
April 18, 2017 5 min read