This guest post was written by David Von Lehman from Aerobatic, a simple yet powerful solution for static website publishing.

In this blog post we'll look at how to use Bitbucket Pipelines to automatically build a website using a static site generator. This example will use Jekyll, but the same formula will work with any generator including Hugo, Middleman, Pelican, Gatsby, and many more. We'll automatically deploy the built site to Aerobatic, a dedicated static website hosting platform. Finally we'll explore how to combine the capabilities of Bitbucket, Pipelines, and Aerobatic to enable a production release workflow based on branches and pull requests that is optimized for teams.

Create a new Jekyll site locally. We can do this by simply running the jekyll create command.

$ jekyll create
$ bundle install
To verify the site builds correctly locally, you can run jekyll serve and take a look at http://localhost:4000.

Now that we have a website, create a Bitbucket repo and push up the code. Our sample repo is named jekyll-pipelines. The full source code available at https://bitbucket.org/aerobatic/jekyll-pipelines.

Make sure the _site directory appears in the .gitignore file. Since Bitbucket Pipelines will be building the site from scratch, we don't want the build output in source control.

Ok, now go ahead and push to your repo:

In this tutorial, we'll be deploying our Jekyll site to Aerobatic, a specialized static website hosting service. It just takes a minute to get up and running:

Now we need to create an Aerobatic website for this repo. At the root of the project run the following command:

To keep things consistent, I'm naming the website the same as the repo. This will create a file called aerobatic.yml that you'll want to commit to Git.

Retrieve your API key by running the following:

Paste it into the value box and click the Secured box.

Now we need to configure Bitbucket Pipelines to build our Jekyll site whenever a push is made. First make sure to enable Bitbucket Pipelines on your repo and create a new bitbucket-pipelines.yml file. Since Jekyll is Ruby based, we'll want to specify a Docker image that has Ruby and Bundler already installed. Aerobatic has published an image to Dockerhub called aerobatic/jekyll that has Ruby already installed along with the necessary low-level libraries required to build most native gem extensions. You can checkout the Dockerfile at https://github.com/aerobatic/docker/blob/master/jekyll/Dockerfile.

Speaking of Docker, there are 3 Aerobatic images available on Dockerhub: aerobatic/jekyll, aerobatic/hugo, and aerobatic/node. Each is based off the ultra-small Alpine base image and has the aerobatic-cli pre-installed avoiding each Pipelines build from having to npm install it from scratch.

The script section is the actual set of commands that will be carried out inside the provisioned Docker container.

That's it for setup, now let's trigger a build. Commit the bitbucket-pipelines.yml to your repo and that should trigger your first build. If all goes according to plan the log output will look like this:

And just like that, you have a first class git push based deployment workflow for your website. With this setup it's even possible to use the browser editor to make content updates or author simple blog posts without ever leaving Bitbucket. 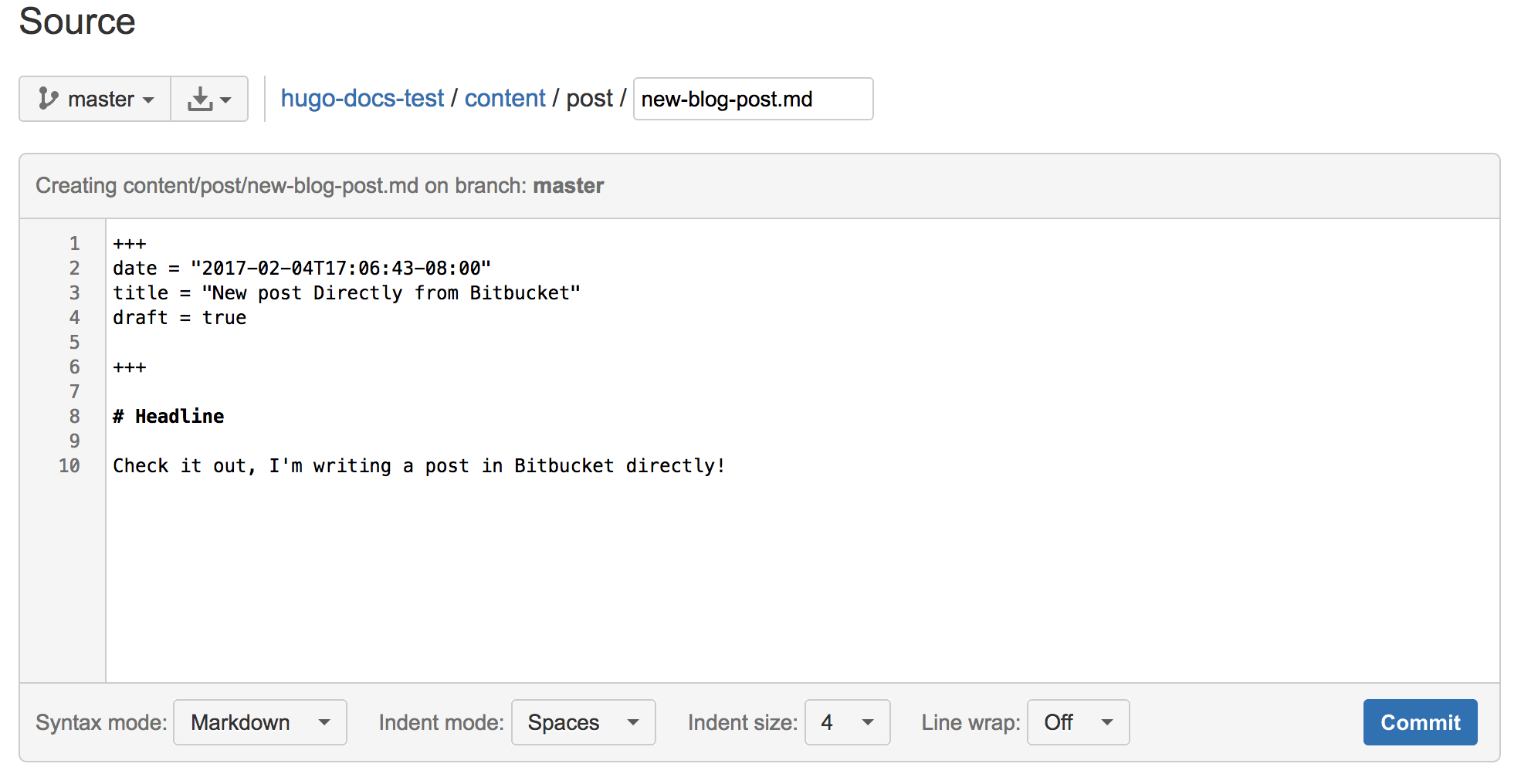 The simple workflow above works great for a site where one or two people maintain the site. But what about a larger team with multiple developers, content contributors, and stakeholders? In agile software development projects, Git pull requests have emerged as the preferred workflow for promoting changes through a series of deploy stages culminating in production. With Bitbucket Pipelines and Aerobatic, this same workflow is easily achieved for static website deployments. Let's assume the same repository structure suggested in the Bitbucket Pipelines guides:

In addition to the production instance of the website, we also need a staging instance. Aerobatic provides a feature called deploy stages that makes this really easy – just pass a –stage option to the aero deploy command.

This command above will deploy the build output to a URL https://jekyll-pipelines–staging.aerobatic.io. In the bitbucket-pipelines.yml we use branch workflows to configure a different target stage for the production and staging branches:

Using Bitbucket permissions you can lock down the workflow to whatever degree you like. For example, you can require that staging and master branches must be updated via pull requests, and specify which users have permissions to approve pull requests. A good rule of thumb is to allow everyone to merge to staging, but only senior personnel to update master (and by extension, deploy to production). The screenshot below shows this configuration:

One lingering detail is preventing the general public from stumbling across the staging site URL. This can be addressed via the Aerobatic password-protect plugin that is declared in the aerobatic.yml file:

The stages property specifies that the password-protect plugin only applies for https://jekyll-pipelines–staging.aerobatic.io. More details can be found at https://www.aerobatic.com/blog/password-protect-a-jekyll-site/.

Over the last several years there has been a trend within DevOps to manage as much of a software system, including the configuration settings and infrastructure definition, as plain text files committed to version control right alongside the rest of the source code. You may have heard the terms "Configuration as Code" or "Infrastructure as Code" that refer to this approach. Aerobatic encourages the practice via the aerobatic.yml file which defines metadata, deploy settings, and runtime behaviors (such as plugins) for the website.

There's a strong argument to be made that this same practice should apply to website content including markdown files, images, etc. Rather than locking content up in a CMS database with its own proprietary mechanisms for backups, auditing, history, approvals, etc., just put it in Git or Mercurial and treat it like any other source asset. With the deployment workflow described above, you'll then have a universal build pipeline regardless of whether the change was committed by a developer or a content contributor.

Now this does present a paradigm shift for content editors that are accustomed to a less techie CMS interface. Fortunately there are a new breed of CMS tools and services that bridge the gap – providing a friendly editing interface but using version control as the underlying data store.  Examples include CloudCannon, Forestry.io, DatoCMS, kirby, and other flat-file CMSes.

The password-protect plugin is just one of many plugins offered by Aerobatic that provide enhanced functionality beyond what is possible with vanilla static hosting. All plugins are configured in the aerobatic.yml file. Some other popular plugins include:

That's it – we now have a first rate team based deployment workflow complete with private staging environment, streamlined approval workflow, and fully automated deployments – all with no infrastructure to maintain and no DevOps engineering. Everything is being treated "as code", safely stashed away in Bitbucket where pull requests, branches, history tracking, and all the other benefits afforded by version control can be applied. This includes the site html, templates, css, JavaScript, configuration, and content.

This same setup works not only with static site generators like Jekyll or Hugo, but also sophisticated single page web applications such as React or Ember. You can learn more about continuous deployment of static sites with Aerobatic and Bitbucket over on the Aerobatic blog.

Updatable websites with Bitbucket and CloudCannon

An easier way to call an api from your web app

This guest post is written by Ivan Storck, Director of Developer Relations at Aerobatic. Ivan has been programming, teaching, and leading…
April 24, 2017 7 min read

This is a guest post from Joaquin Cid. In the following tutorial, we'll learn how to setup a CI/CD pipeline using…
April 24, 2017 7 min read