There are two essential screens?"pages", if you prefer?on a site like Bitbucket. The "source" screen displays a project’s source files in their current state or as they existed at some point in the past. The "commits" screen depicts a project’s changes over time, which helps to answer questions such as:

Until late last week, Bitbucket’s commits screen looked something like this: 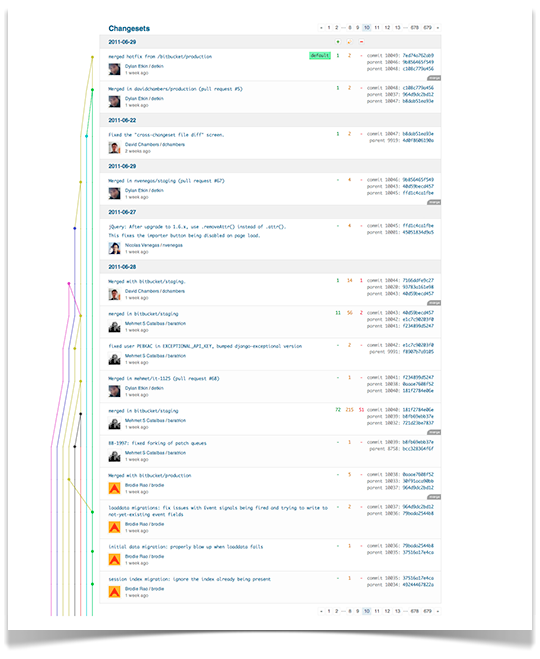 The fifteen most recent commits were displayed, and one could use the pagination links to view older commits. This was perfectly sufficient for answering the question "what’s happened lately?" It was *horrible* for questions such as "when did Jonathan last fiddle with Google Analytics code?" Have fun clicking through 300 pages!

The solution was to return to the command line and enter something like:

Four times each year, Atlassian developers and a smattering of non-developers engage in "FedEx". Everyone chooses a cool project to work on from 2pm on a Thursday until 4pm the following day when we all present what we’ve managed to get done. The idea is that many of the cool features developed during FedEx will actually ship. Well, this is what we shipped: 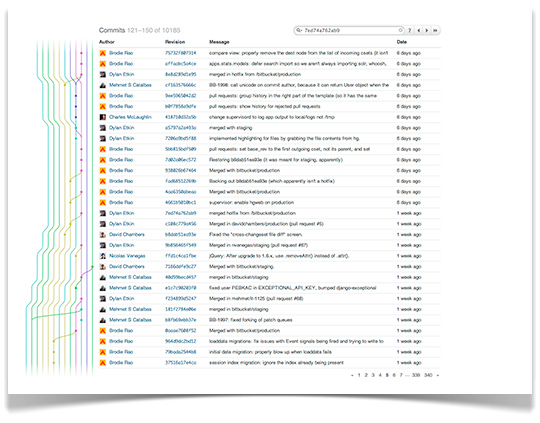 Brodie had the idea of leveraging Mercurial’s "revset" functionality to make the commits log searchable. We decided to team up for FedEx and make it happen. Now, there’s no need to leave Bitbucket just to find a commit:

Revsets are much more than an alternative to hg log --user and hg log --keyword. My favourite filter, for example, is not merge().

It’s great to be able to tap into a powerful Mercurial feature without leaving Bitbucket, but one shouldn’t be forced to conform to a DSL’s syntax to do a simple search. So, we automatically convert simple text searches into the appropriate revset query. Searching for static media, for example, will find commits containing the word "static" or the word "media". Searching for “static media” (with quotes) would return commits containing both words.

Brodie and I weren’t satisfied with just making the screen work better. We were out to win FedEx, after all, so it had to look great too. We made a number of changes to the way in which the information is displayed:

Several users have brought it to our attention that these changes make it difficult to see at a glance which branch each commit is on. We’re keen to address this, and will be rolling out a small change at some point within the next couple of weeks.

Chime in in the comments thread to let us know what you think!

Beginning on April 4th, we will be implementing push limits. This means that your push cannot be completed if it is…
July 07, 2011 3 min read