[This guest post is written by Jesse Gibbs, Head of Product at Rollbar. Jesse is a developer turned product manager who has spent 15+ years at companies building tools for software development, devops, and QA teams.]

Rollbar notifies developers in real-time when critical errors occur in their production apps. And now, Rollbar integrates with Git repositories and issue tracking in Bitbucket so that developers can troubleshoot and fix errors fast, ensuring that important errors don't slip through the cracks.

Let's take a look at how this works:

Correlate Errors to Deploys
It's easy to notify Rollbar every time you deploy to production or release a new version of your app. Rollbar integrates with Bitbucket Pipelines, and you can easily track deploys with other tools. Tracking deploys unlocks several valuable features in Rollbar that will make root cause analysis easier.

View deployment details
Rollbar's Deploys view provides a quick summary of all your recent deploys, including who triggered the deploy and what changes were included. This information can speed up root cause analysis when a recent change led to a spike in errors.

Visualize deploys and errors across time
When deploys are tracked in Rollbar, they will appear in project and error-level timelines that show error frequency across the last few minutes, hours, and days.

With deploys displayed on these charts, you can quickly confirm if a particular deploy caused a spike in errors.

Track Rollbar errors with Bitbucket issues (JIRA too)
Production apps often have more errors than developers can fix immediately. To ensure that nothing slips through the cracks, Rollbar errors can be linked to Bitbucket or JIRA issues.

Issues in Bitbucket and JIRA can be automatically or manually created from Rollbar, or a Rollbar error can be linked to existing issues. When Rollbar errors are resolved or reopened, the corresponding Bitbucket or JIRA issue is updated. 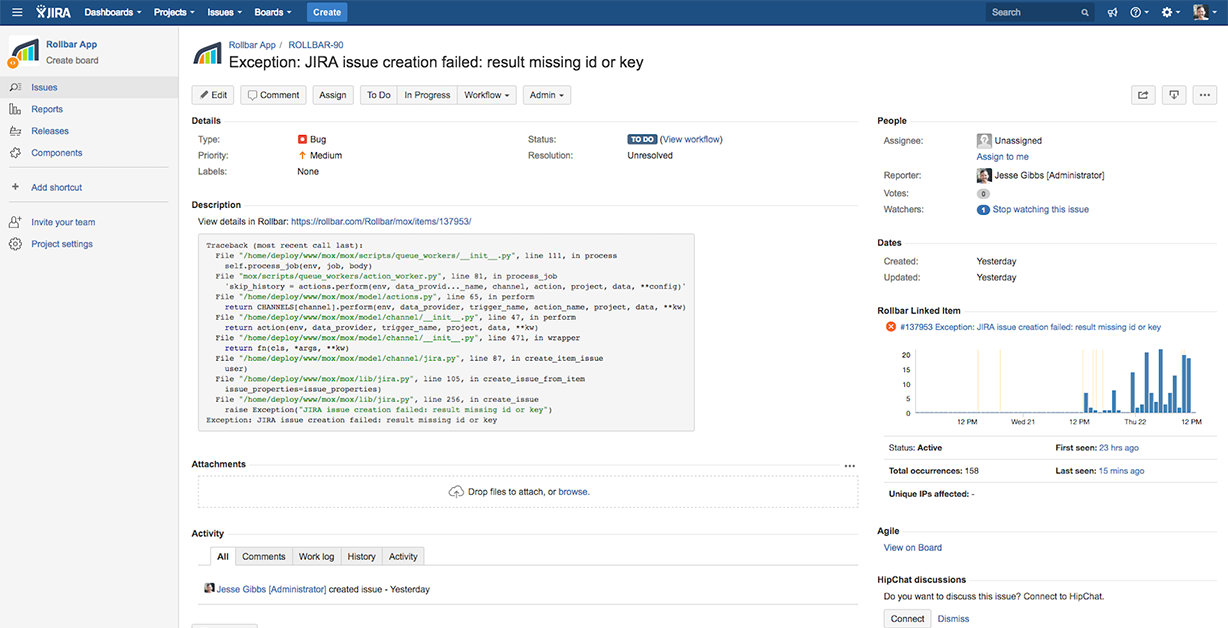 Error monitoring tools surface runtime errors and/or crashes within your application. Learn more on how they help you find and fix bugs.
January 06, 2017 3 min read

Atlassian Connect for Bitbucket: A new way to extend your workflow in the cloud

More than 3 million developers and 450,000 teams use Bitbucket to manage and collaborate on source code. But code collaboration is…
January 06, 2017 3 min read

Big shout-out to our partners AWS, Sentry & Snyk who are sponsoring this promotion. Qualify for this promotion by signing up…
January 06, 2017 3 min read